Blog
You are here: Home1 / Blog2 / Articles3 / How Gear Can Help Take Your Training To The Next Level 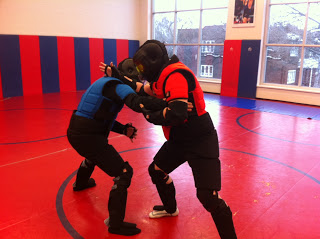 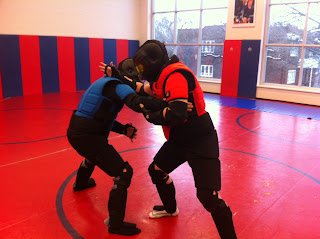 The following is a great article written by Ed Flosi. Ed’s a police sergeant in San Jose, California. He has been in law enforcement for over 25 years and is currently assigned as a supervisor in the Training Unit. Ed has a unique combination of academic background and practical real world experience including patrol, special operations and investigations. Ed is the current lead instructor for; (1) use-of-force training, and (2) defense and arrest tactics for the San Jose Police Department.

Using impact suit training effectively and safely
Impact suit training plays an important part in developing an officer’s abilities in and understanding of defensive tactics, known to many as close-quarters combat. Though DT/CQC training encompasses many aspects of potentially violent physical encounters, the time dedicated to impact weapon training can often be sterile and unrealistic. The ability to have a role player suit up in a protective suit and act out dynamic movements can break through the rote drills and deliver a multitude of benefits.

One benefit that many trainers agree on is the ability for the role player to hit the student. While this may seem cruel or malicious to the uninformed, there are many police recruits that have never experienced the physical/emotional force and violence of a school-yard fight, contact sports, or a general punch in the face. This is partly (at least) the consequence of a generational change in society.

During the course of a career in police work, there is a high likelihood of an officer being involved in a knock-down, drag-out fight while attempting to take a suspect into custody. During this type of altercation, taking a “punch on the nose” is not unrealistic. It is a good idea for the trainee to discover the physical and emotional response to being punched in the face while still in a training environment. It is important to allow the trainee to experience this sensation, but only to the point that it is instructional and controlled. There is a vast difference between delivering a controlled strike to the student in order to allow him/her to experience it and pummeling a student simply because the role player can.

Injury Mitigation
There is no way to absolutely guarantee that the student will not get injured in these activities but there are several things that can be done to lessen the risk. First and foremost is to remember the purpose of the impact suit. The impact suit was designed to protect the role player from blunt trauma injury. Though impact suits have hand protection similar to those worn in martial art competitions that will mitigate injury to both participants, it was not designed to protect the role-player instructor so that he/she could inflict damage upon the student. As with any training delivery, it is about the student learning and never about the instructor being able to defeat the student. The selection of the instructor to be inside of the impact suit is crucial and should be limited to certified defensive tactics instructors.

A person should not be selected if he/she:

1.) is more interested in impressing the students with their physical skills
2.) cannot control their own emotions and intensity during the scenario

Selecting the proper head gear for the student is critical if the role player is allowed to strike to the head of the student. The head gear should offer sufficient padding surrounding the head to lessen the risk of head injuries. Even the best head gear will not prevent head trauma from a strike that is delivered with full force. Again, it is important that the role player delivers only controlled strikes that will produce the desired effect. Equally important is some type of protection across the face that still allows the student to clearly see the role-player instructor. This will help prevent the nose breaks that will certainly come from using head gear with no face protection. There are several manufacturers that offer face shield solutions.

A student that becomes panicked, overwhelmed, or enraged and begins to use tactics that may easily injure the role player must be stopped by the safety officer immediately.

Staying Safe and Effective
Identify the training objective(s) and set the scenario to accomplish the objective(s) with the idea that the student will succeed if they follow the learning points of the lesson. The scenario elements should be as realistic as possible and the role-player instructor should act the part as if it were a real situation. Students should be instructed to take the training seriously and participate as if the situation was an actual field encounter.

I was privileged to have recently attended a course taught by members of the Salt Lake City Police Department regarding their response to several active shooter events (I highly recommend this course for all law enforcement). Among the many points they discussed, one that parallels our training objectives was the need to convince the students that the training scenario is real in their own minds. If the student believes the training scenario to be real, the brain will be “tricked” into thinking that the student has already “been theredone that” when the actual event happens.

Allowing the role-player instructor to improvise and/or deviate from the script for the sake of amusement or self-gratification should never be allowed. An example of this would be a scenario that is designed to test the impact weapon skills of the officer while under stress after cardiovascular exercise to increase the heart rate. The role-player instructor is ordered to continue the fight until instructed by the safety officer to stop. The role-player instructor is told to only offer resistance that would not cause the student to have to use deadly force. It would completely alter the scenario from the objective if the role player were to decide to change the parameters of the scenario to include:

1.) attempting to disarm the student (which may be a great scenario in another training session), or,
2.) pulling the student’s shirt over their head and pummeling the student with repeated hammer fist blows to the back of the head

Assessing Submission Recognition
One of the advantages to impact suit training is the capability to assess the student’s ability to “switch on” the force when it is objectively reasonable to do so. Officers that use too little force or hesitate to use force when appropriate increase their risk of injury and sometimes end up using a more intrusive level of force to solve a now more dangerous or out of control situation. Just as important to assess this “switch on” ability, it is equally important to assess the student’s ability to “switch off” the force when the suspect has submitted.

The ability to conduct successful impact weapon suit training is completely in the hands of the trainers. Keeping the training realistic, effective, safe and within the parameters of your learning objectives will allow this important training to continue in your agency. 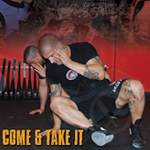 On Competition in the Marketplace by Scott Sonnon