Blog
You are here: Home1 / Blog2 / Articles3 / On Competition in the Marketplace by Scott Sonnon

Recently, I reviewed a product by a company. A competitor of that company called into question my integrity for having reviewed it, because the competitor claimed to have been the owner of the design. Another poster suggested that I would feel just as slighted if someone knocked-off my Clubbell design and claimed it as their own. That raises an interesting point about the nature of the marketplace, and I wanted to share a perspective on the situation, based upon martial art.

Several companies have copied my Clubbell patent. Never once have I ever been involved in its cessation, as the issues were handled through legal channels purely. In most cases, the infringement was stopped. In a few cases, design variations were deemed sufficient to establish it as a non-infringing “new design.”

These Clubbell variants have not only NOT affected my business at all, but with each USPTO certified innovation, my business has increased. Why?

Firstly, because the public craves commercial competition in the marketplace; and only trusts a product if it’s a non-monopoly in price and design. The more options available to the public, the greater total purchasing power that the public invests; the more competitors – the more the sum total purchases. People only trust a product, if its evolution and price is being contested by competitors.

Secondly, because prospects eventually make their way back to me, as the original innovator, since investigation of a discipline explores quality of options and My company is the most experienced and educated (currently) in the discipline.

Lastly, people come to me and stay with me because of my company’s integrity and customer service. The pettiness and juvenile drama of some of my would-be competitors only alienates them and drives customers to my company. I actually try and work with my competitors to lift their maturity level, since I am a fighter and have learned that: better competitors makes ME a better fighter.

I’ve had people I’ve never met, this morning, email and message me, calling into question my integrity simply because I’ve reviewed some company’s product. This sort of immature vitriol PUSHES me away from ever dealing with those people, and NEVER referring them to the government agencies I train. Poor business choices guided by emotion lead to my last point above.

No matter what this party/family writes about me, the clients I train trust my word, because I’ve earned it repeatedly in my behavior and actions, when push comes to shove. Trying to involve me in drama, and indict me of complicity in someone else’s emotional meltdown doesn’t impact me whatsoever.

I’ve been in my business for a very long time. And I’ve been reminded of a very important lesson by people attempting to draw me into what ought to be someone else’s legal battle. That is this:

I believe in the power of capitalism. Monopolies are characterized by a lack of economic competition to produce the good or service and a lack of viable substitute goods. Patents are an example of a gov’t enforced monopoly, and even they have expiration dates. Why? Because monopolies are anti-competition, and as a result anti-capitalism.

If there were legal recourse for a valid patent infringement, it’s actually a very simple matter to dispute through legal channels. (My FB page isn’t the place for it.) My company has done this several times successfully.

However, there have also been cases where it was deemed not an infringement. In those cases, I am a better businessman because of the competition. The competition forces me to improve in product effectiveness and cost efficiency.

The ultimate decision is made not in court but by public opinion of the product and service. For example, a former associate of mine released a video of a technique I had created. They taught it dangerously and ineffectively. Instead of trying to claim ownership of it (since you can’t “own” movement legally anyway), instead of even complaining that they were never certified in it, I instead avoided all drama, and just offered a free tutorial video demonstrating safe and effective coaching in the technique.

I will stand toe-to-toe on my coaching with anyone in the world, because that’s what I’m best at. The public will execute their vote as to who has the best product or service. And if they’re better, I will become better from it.

I am a fighter, so my belief system has been carved by the nobility of actually getting on the mat and fighting against superior opponents, again and again. I value every loss as much as each win, because the process of ongoing evolution not only helps me as a person, but all of my students and clients through my betterment. 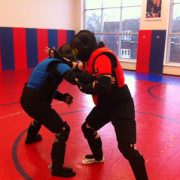 How Gear Can Help Take Your Training To The Next Level